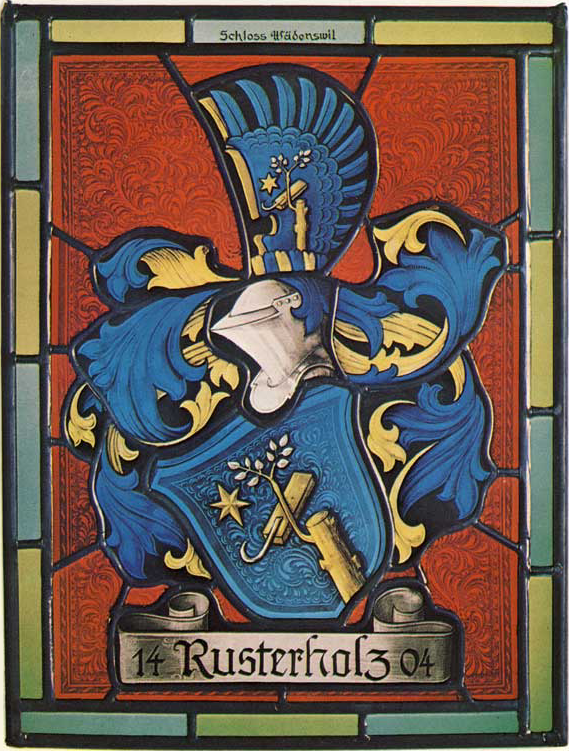 The surname Rusterholz (pronounced Rueschterholz in the local dialect) is derived from the Swiss German word Rueschtere/Rueschen, a rare species of elm that gave superior wood for use in wagons (cf. High German Rüster, elm). The name designated either a joiner or a place of residence by an elm grove. The first known mention occurred in 1404, when der Rusterholtz, 'the (man) Rusterholz', inhabited the farm on the Gisenrüti in Wädenswil. Families by this name obtained citizenship before 1800 in the municipalities of Richterswil, Schönenberg, Uetikon am See, and Wädenswil.

Hans Rusterholz lived at the Egg in 1634. At least 2 children:

Kaspar Rusterholz from Richterswil, district judge, died before 1818. He lived in the Holz ('Wood') when he married on 14/15 November 1764 to Susanna Pfister, baptized 27 December 1744, died 1829 (daughter of Jakob Pfister and Anna Isler, Wädenswil; Jakob was a grandson of Anna Rusterholz). Since they were second cousins, the wedding took place in the Grossmünster ('Great Minster'), Zurich. Kaspar and Susanna lived at the Egg. Children:

1. a child that died young

·         The eldest was Barbara Tanner, baptized 2 July 1786. She married 14 March 1808 to Heinrich Rusterholz. They lived in Haslen in the village of Samstagern, Richterswil.